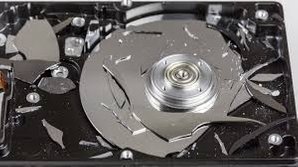 Is it possible to recover deleted files on an SSD disk? Check out this Youtube link: You get the answer here

What do you do / or not to do on a hard drive crash?

In the event of a suspected hard drive crash, it is important to find out what has happened. If the hard drive sounds bad or abnormal, it is absolutely safest to leave it turned off. This is to avoid the risk of aggravating any mechanical damage to the hard disk storage media, which impairs the chances of a successful disk rescue.
Your disk may not be broken due to. a physical fault?
It is most common for the file system or firmware to become corrupt, it is certainly not uncommon for the read heads to "just" shut down, but this usually means that you can try to restore the files via a program.
It is the same type of error if your disk does not show up in your computer or it shows you 0 mb storage amount, it may become very tough, it reads and reads = sector error.
Is your computer starting to display blue screens? Most often it is due to. that your disk starts to give up, not because. your operating system!
You can install a freeware program called ChrystalDiskInfo, which will show you if your disk is shutting down.

If your disk has been dropped or otherwise subjected to physical exposure, do not connect the disk repeatedly, do not aggravate the damage and make it impossible to save data. When a defective hard disk is repaired after a physical damage, the repair is performed only to restore data. The hard disk can not be reused later and should be destroyed when data is secured.

It is important that you quickly shut down your computer if you hear clicking sounds. The most common reason for a hard drive to stop working is that you were unlucky and lost your computer or external hard drive on the floor. We recommend that you turn off the broken hard disk as soon as possible and leave it to us as untouched as possible. Then we have the best possible chance to be able to repair the hard drive for you and restore your files to working condition.

Never put a hard drive in the freezer

Never put a hard drive in the freezer, disks have been examined after being exposed to this youtube trick, and it has damaged the media to such an extent that the data could no longer be saved.

A modern hard drive may only be opened in a clean room. A disc that has been opened and connected later will destroy the head and media with data in a very short time. Subsequent data recovery will be more expensive as the contaminant must be removed before the disk can be repaired. The price usually increases by SEK 1,500 for extra cleaning of the disc. If a disc is severely contaminated and connected, there is a high risk that data will be destroyed in a few minutes.

Replacement of PCB / control board

Do not replace the circuit board on your disc with the equivalent, it will not work. The circuit board on all modern hard drives contains so-called adaptive data, these must be moved from the defective card to the new card. On some models of disks, all data may be lost when you install a new card.

Do it yourself program

If you are sure that your disk is not working properly or you have deleted or formatted your disk, then there are some good programs that you can use to save data. Remember to never install the programs on the same hard disk to be copied. The program must be installed on another computer, the disk to be copied / reviewed must be connected to the other computer and then reviewed by the program. Never use Hdd Regenerator - On an incorrect or weak disk, the program will destroy data.

There are many stories and bad videos about how to save data yourself from your faulty hard drive. There are very few of these that work, and this is typically due to very simple errors. Opening a modern counter outside a clean room makes data collection much more expensive. So if data matters, this is not a way I would recommend. Get a price on proffesional data recovery first - is your data not so much worth you can always try yourself.

If you are sitting and think that Gotland HDD Recovering should recommend you fix it yourself - then no. The reason for this recommendation is due to the many requests I receive where the result of "doing it yourself" has damaged the disk so much that data can no longer be saved. Such a message is never pleasant to convey, especially when it could have been avoided.

How to fix broken read heads

Repairing a hard drive with broken read heads is not easy, it requires extremely great dexterity. The entire reading device, including the reading arm, must be replaced in one piece by hand. It is about ultra-small details and extremely high precision.

You must also have a perfectly matching extra hard drive to take spare parts from. We usually call it "donor". It really has to be a perfect match with the right batch and the same firmware (control codes).

Repair hard drive by replacing read heads in clean room. If you do everything right, and the operation goes well, the hard drive can work helpfully for a couple of hours. Enough to extract raw data from it and save data. You must have access to a particle-free clean room or a clean room box. You cannot open and repair a hard disk in a normal room and then restart it. Then the hard disk can be destroyed very quickly due to small particles that are let in via the room air. These particles create micro-level collisions between the read heads

- This site is made by me